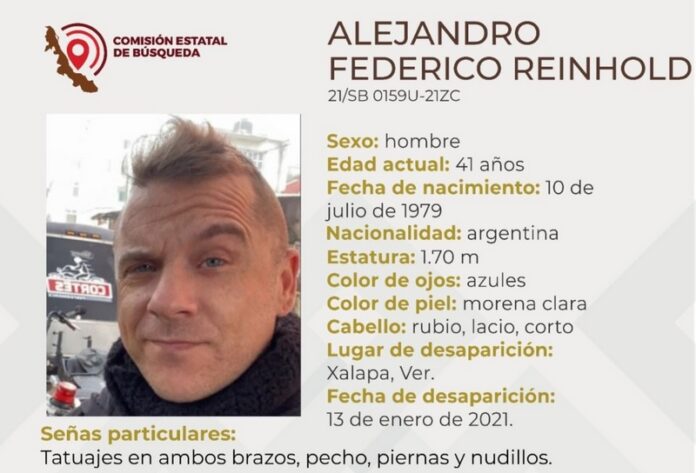 Relatives of Alejandro Reinhold, an Argentine who disappeared in the National Bridge of Veracruz, demanded from the state government a greater impulse in the investigation of the events and to find his whereabouts.

XALAPA, VERACRUZ. (Feb. 25, 2021) .- Relatives of Alejandro Federico Reinhold, an Argentine citizen who went missing a month and a half ago in the Chichicaxtle congregation of the municipality of Puente Nacional de Veracruz, demanded a greater impulse from the government of Cuitláhuac García Jiménez in the investigation of the facts so they can find his whereabouts.

In the framework of the visit of the President of Argentina, Alberto Fernández, the family members stated that they can no longer cope with the anguish and pain over Reinhold’s disappearance.

“We have not had any news regarding the great advances in the investigation, which a few weeks ago the governor of Veracruz, Cuitláhuac García Jiménez, mentioned publicly to the media.”

In a statement, the relatives appealed to the historical solidarity between the peoples of Argentina and Mexico, so that in the coming days the investigation will take a greater momentum and they can find Reinhold.

“Family and friends reiterate the request for collaboration to the authorities and the Mexican people to find the whereabouts of Alejandro and make progress in the investigation,” they stressed.

Two weeks ago, Governor Cuitláhuac García Jiménez indicated that a search is being carried out in Veracruz to locate Alejandro Federico Reinhold, “Duke”, originally from Buenos Aires, Argentina.

He explained that the issue had already been addressed at the Peace Building Table, held last Wednesday, Feb. 10th, with the State Search Commission (CEB) and the State Attorney General’s Office (FGE).

At a press conference, the state president mentioned that there is progress in the investigations to find the whereabouts of the Argentine citizen, but did not give details.

“They are in coordination in the search mechanism, they have information that is already very advanced and mainly to investigate the issues that could derive in their absence these days, progress is being made in the investigation and it is still underway,” he said.

On February 1, the Argentine embassy in Mexico issued a statement requesting information and finding the whereabouts of the 41-year-old man.

The authorities do not rule out that his disappearance is related to an act of violence; However, another line of investigation points to the voluntary absence, as the Argentine’s friends told the authorities that he could have traveled to Cancun, Quintana Roo.

The last contact that his relatives had via cell phone with Alejandro Federico Reinhold- also known among his friends as “Duke” – from his cell phone was on January 13th.

Siblings from Oaxaca are arrested for the disappearance of an American