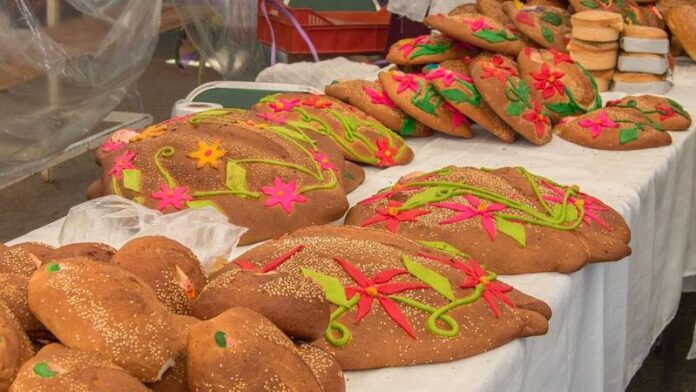 The great variety of bread of the dead in Mexico and in the world is impossible to understand if we refer to the origins of this food. Its genesis is rooted in the All Saints celebrations, a holiday in which the martyrs (sanctified centuries later) who died in defense of the Catholic faith were honored.

According to the conference “Among relics, sweets, weaklings and skulls. History of the Pan de Muerto in Mexico ”taught by historian Eva Martínez Román, the decorative elements of the Pande Muerto are representations of the relics that in past centuries were venerated during the festivities of Todos Santos (first days of November).

The relics of the saints (skeletal remains, garments, etc.) were richly adorned with jewels, fine fabrics among other trappings. During the celebrations, the parishioners bought relic-shaped sweets or bone-shaped bread that were later blessed in the churches.

Finally, these pieces were placed at home next to the figure of the saint who was venerated and various fruits. That is to say, a kind of ‘proto altar’ of the dead.

The syncretism between indigenous cults and Catholic beliefs brought by the Spanish had repercussions not only on religion but also on gastronomy.

The reminiscences of this cult to the relics of the martyrs and the celebrations of pre-Columbian cultures resulted in the Day of the Dead festival: the placement of altars and the making of a great variety of loaves of the dead.

We tell you about some varieties of bread that are prepared in different communities of the Mexican Republic.

* This curatorship was taken from the collection of panes de muerto compiled by the linguist and writer Yásnaya Elena Aguilar Gil, whose consultation can be reviewed at the following link.

Tiny ‘ghost’ shaped breads are prepared in this region of the southeast of the country. As for attire, colorful ‘skirts’ are decorated with nice eyes and a little mouth.

This town is located on the Purépecha Plateau, where a very artistic style of bread is made and decorated.

The silhouette of the piece resembles that of a woman and the applications are very close to a meticulous handicraft work in which the skirt worn by Puréchecha women, the shawl that covers the head, and even accessories such as necklaces or earrings is decorated.

In this town, the bakers are also artisans, as the loaves are decorated with huge flowers, faces and applications in bright colors.

The simple bread looks like a canvas on which a master craftsman dumps brushstrokes of sweet flavors.

There is a lot of variety, but one stands out in its gastronomic heritage: round loaves that show a curious and tiny human face made with a kind of ‘caramel’ in pink, blue, green, etc.

The Greek characteristics of the ruins of Mitla seem to be transferred to the decoration of the loaves of the dead in this Oaxacan town; however, they are not the only figures that exalt this food. Also, the virgins and religious figures are part of this traditional decoration.

With a kind of white liquid caramel, the shapes that each baker has by tradition or demand are added. The size of the loaves is generous, worthy of veneration at the altar of the dead.

In this Oaxacan municipality, bread is made in the form of ‘animitas’ whose decoration is made with a colored glaze on the upper part (face) and lower part (belly).

These celebrations have their maximum expression in the traditional offerings, full of very specific elements and great color.

The altars of the dead have their origin in pre-Hispanic cultures. An offering similar to the current day of the dead was that of the goddess  Cihuapipiltin, dedicated to women who died from the first childbirth, it was believed that they hovered in the air causing diseases among children, for that reason they gave them gifts in the temple or in the crossroads of the road.

The offerings consisted of “loaves” of various figures such as butterflies or rays (xonicuille) made from amaranth and “unleavened bread” which was a dry and toasted corn bread,  Fray Bernardino de Sahagún describes it this way because it does not have lime, This bread was called yotlaxcalli, others offered some tamales (xucuientlamatzoalli) and toasted corn called Izquitil, almost all the offering was amaranth because they considered it a special food.

Fray Diego de Durán relates in his chronicle about the Huitzilopochtli offering, that the people in this celebration “did not eat anything other than tzoalli with honey”, with said mixture based on amaranth and wasp or maguey honey, they made a great idol in the image of God, they adorned and dressed it, in the same way they made large bones that they placed at the feet of the idol, they also offered other “loaves” such as small tortillas; after the party they were divided to eat.