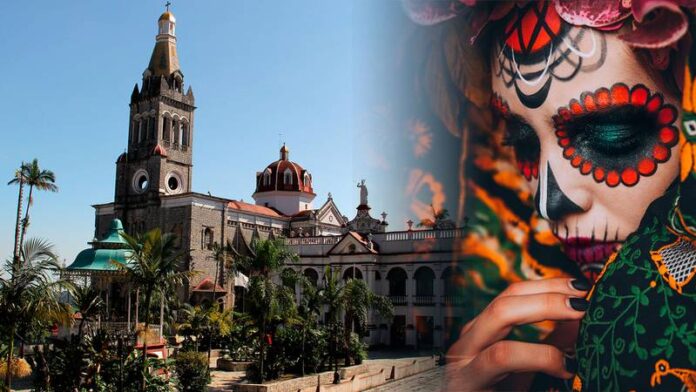 All over the country, people are preparing to carry out this traditional festival, with more than three thousand years of history.

The celebration of Day of the Dead is one of the most emblematic for Mexicans for all that it represents on a cultural and spiritual level not only in our country; This Mexican tradition was named in 2008 as Intangible Cultural Heritage of Humanity by the United Nations Educational, Scientific and Cultural Organization (UNESCO).

The return of our deceased on November 1 and 2, also known as All Saints ‘Day (November 1, and all deceased children and young people are celebrated ) and All Souls’ Day (November 2, and is directed towards adults ), represents another opportunity to live with them.

As every year, all over the country, people prepare to carry out this traditional festival, with more than three thousand years of history, buying Cempasúchil flowers, the classic papel picado, and skulls to put on the altar for all their beloved.

But it is in the Magical Towns of our country where this tradition has a special meaning and various activities are carried out in the pantheons, public squares and emblematic places of the town, which also open their doors to tourists from all over the country to experience the Day of the Dead parties in a more traditional setting.

In Pátzcuaro and its surroundings (Yunuén, Janitzio, Urandén, and La Pacanda) the Day of the Dead festivities are the largest in our country: if you go to this town you will be able to observe the Lake of Pátzcuaro full of canoes illuminated with candles and flowers of multiple colors, where you go from Patzcuaro to the island of Janitzio, where is pantheon of Tzirumútaro.

Despite the fact that this year it was announced that for the second time the passage to tourists on the island of Janitzio will be closed, Pátzcuaro will be illuminated with thousands of candles and the orange of the Cempasúchil flowers will predominate so that ‘ La Puerta del Cielo ‘ (meaning of Pátzcuaro in Purépecha) becomes rather the door to the earth for All Saints and The Faithful Deceased who will arrive in town on November 1 and 2; the celebrations sometimes start from October 28.

For the inhabitants of Santa Fe de la Laguna, death rather represents the continuation of life, and Día de Muertos becomes a very familiar celebration, as both young and old participate in the placement of offerings and altars to the deceased.

One of the attractions of the town is its monumental altars directed to All Saints, although all adults who died being ‘pure and virgins’ are also considered; It is even possible as a tourist to enter to admire the offerings of private houses as long as a present is taken to place in the offering.

In recent years, Tlaxco had filled its streets with dozens of catrinas in a parade as part of the ‘ Festival La Vida Eterna ‘; There was also a contest of legends and a great coexistence between the inhabitants of the town and tourists who came to admire the altars.

This year, the Day of the Dead commemoration began in the town hall of the town, where an offering was placed in honor of Manuel Santillán Osorno, who was Governor of Tlaxcala from 1941 to 1944; He was also the first General Director of Petróleos Mexicanos (PEMEX), who worked hand in hand with President Lázaro Cárdenas for the oil expropriation.

On October 31 and November 1, the Tlaxco Municipal Cemetery will have its doors open 24 hours a day for locals and foreigners to attend to decorate the graves of their loved ones and join in a great party. In addition, the Municipal Government announced that this year a tomb contest will be held, where the winner can win a prize of four thousand pesos, in addition to other surprises for the first three places.

Among the traditions that we can find in Cuetzalan are processions, representations and the classic offerings that honor all the deceased, and the one that begins on October 30 remembering all the deceased children and ends on November 3, with the festivities for grown-ups.

The streets of the town are filled with flowers and candles to call the deceased; In the offerings, the classic path with acerrín and Cempasúchil is used and the Catholic churches perform bell tolls day and night, from noon on November 1 to noon on November 3.

In Taxco they are already preparing to start the celebration of the Day of the Dead, and as part of the traditions and customs of the town, we can see a large figure of the Catrina, made with more than 18 thousand Cempasúchil flowers of various shades, adorning the Borda square, at the foot of the Santa Prisca parish.

Previously, the ‘Festival de las Lloronas’ was held, in which there were a series of activities that included the reading of Mexican legends, such as La Llorona, and contests of offerings and catrinas, among others.

Although this year apparently will not be held, what you will be able to appreciate in the streets of the town is a large number of offerings installed in the streets, and when you arrive at the zócalo you will find a large offering in memory of some of the illustrious characters of Taxco.

San Miguel de Allende is one of the most representative Magical Towns of our country, and it was clear that it would not be left behind with the activities within the framework of the Day of the Dead celebration. In this sense, the Directorate of Culture and Traditions prepared a program of activities that runs from October 27 to November 7; The best? In addition to the face-to-face activities (which we will talk to you about right now), they have a prepared agenda with virtual activities, in case it is not possible for you to travel.

Some activities, such as the catrina parade, were suspended; However, there will be others such as offerings, skull painting workshops, photographic exhibitions and plays, as well as guided tours where attendees will be able to appreciate the offerings and altars made in the town, as well as four giant skulls that are distributed in the Plaza. Cívica, in Plaza Insurgentes, in Parque Zeferino and in Parque Juárez.

Among the virtual activities that the town will offer are workshops, concerts, poetry recitals and presentations of plays.

In addition to being able to appreciate a great traditional offering, with all the classic elements of the Day of the Dead altar, where you can also participate and place the image of your loved ones so that everyone remembers them, Real del Monte has prepared an activity called ‘ Magic Festival of Horror ‘.

If you are more of the wave of terror, the activities of this festival are for you; It takes place from Thursday to Sunday, from October 1 to November 2, from 4 in the afternoon to 12 at night. It has five attractions, ranging from the most terrifying stories in the British cemetery of Real del Monte, mining tunnels of Real del Monte and the Hiloche forest, among other places in the town.

These activities have a cost, ranging from 150 pesos, which will include a single attraction, to a ticket of 1,400 pesos, which will have a meeting point at the Paste Museum, transfer on the bus of the exorcists to the English Pantheon where you will live a paranormal experience with specialized equipment, guided by Carlos Trejo, and one-time access to all attractions.

These are just some of the activities that these towns have programmed for the Day of the Dead celebration this year. We know that there are many more, however, due to the COVID-19 pandemic some of these have been canceled or rescheduled.

What is a fact is that the tradition of celebrating our dead on November 1 and 2 is one of the most special of the year, and that is why we are already beginning to prepare for its realization and receive our deceased.