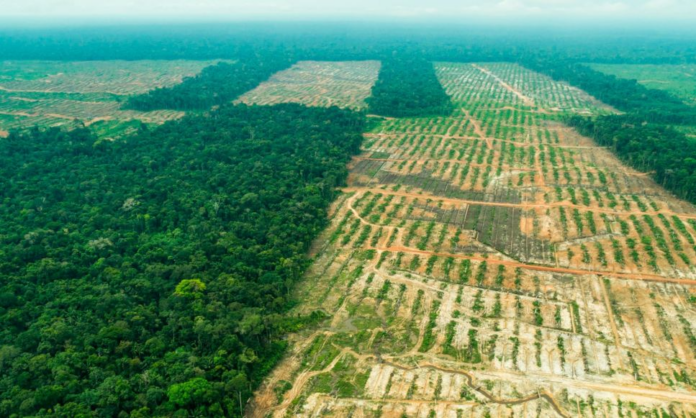 Forests are essential for the Earth to function, as they retain large amounts of carbon and release oxygen (one hectare of forest can capture up to 250 tons of carbon); Likewise, they influence the rains, filter freshwater, prevent floods and prevent soil erosion.

The rates of deforestation suffered by our country are alarming. The accelerated destruction of forests has placed a great variety of species of flora and fauna that depend on this ecosystem in a state of emergency.

According to data from the Center for Social Studies and Public Opinion ( CESOP ) of the Chamber of Deputies, Mexico occupies one of the first places in deforestation rates in the world. Official estimates show a loss of wooded vegetation in recent years of about 1.08 million hectares per year, a figure that is estimated at 775,800 ha/year if only forests and jungles are considered.

The main cause of deforestation is the change of land use to turn forests into pastures or fields for cultivation. This practice has been promoted by all levels of government, which has been criticized arguing that it has only seen forests and jungles as unused land, without being able to understand their multiple benefits, also questioning the existence of incentives that have led people to Tackle their forests in exchange for financial resources, such as Sembrando Vida, the federal government’s flagship environmental project, which has promoted deforestation through widespread destruction and possible subsequent regeneration.

According to various non-governmental organizations, there have been emblematic cases of deforestation in Mexico such as the excessive growth of avocado plantations in the Purépecha region of Michoacán, the advance of extensive cattle ranching in the Los Tuxtlas Biosphere Reserve, in Veracruz, the absence of a management plan in La Malinche National Park, in Tlaxcala and Puebla; and the voracious growth of the urban area on the so-called Great Water Forest, a geographical area shared by Morelos, the State of Mexico and Mexico City.

In the foothills of Mexico’s Yucatán Peninsula, the forest abruptly stops and dozens of saplings grow strewn around charred tree trunks.

The seedlings respond to the extensive reforestation program of the Government known as ‘ Sembrando Vida ‘, but also the burned areas. In this part of Mexico, the project is simultaneously related to widespread destruction and regeneration.

Under the previous government, the owner was paid to take care of the jungle within his territory, but when Andrés Manuel López Obrador assumed the presidency in 2018, they cut the budget for the program. Its replacement pays peasants to plant trees for fruit and wood production, with the aim of creating an industry in disadvantaged rural areas for decades to come.

But a trip in late February to Yucatán and Campeche, two participating states in southeastern Mexico, revealed that failures in the very creation of the project could jeopardize its good intentions.

“This is what Sembrando Vida does,” said José, a local farmer, kicking a black log. He asked not to reveal his last name for fear of losing government funds for criticizing the program.

Locals say the system encourages farmers to clear forest land to prepare it for planting. Uncertainty also abounds about the legal status of replanted plots, meaning there is no guarantee that farmers will be able to harvest them, so for some, there is little motivation to care for these new plantings.

“In many places, people went to say: ‘Well, I had my hectare of jungle, but the program is coming because I throw the jungle away, the trees are good for my house or to sell wood or for whatever and when I come. the new program I sow again, ” said Sergio López Mendoza, professor of ecology and conservation at the University of Sciences and Arts of Chiapas, the southernmost state of Mexico.

The Office of the President declined to comment on this note. The Ministry of Welfare, in charge of Sembrando Vida, did not provide a response to detailed questions about the program.

Sembrando Vida currently pays about 420,000 farmers a sum of 4,500 pesos (about US $ 213) a month for planting trees, according to the government. The goal is to reforest a little more than a million hectares of deteriorated land throughout Mexico and to cultivate more than 1 billion plants by the end of 2021. The government says it is on track to meet that goal.

That success may have come at a cost, according to the World Resources Institute (WRI), a nonprofit environmental organization that has worked with the Mexican government to monitor the results of Sembrando Vida. The Washington-based WRI estimates that the program may have caused the loss of nearly 73,000 hectares of forest cover in 2019, its first full year, according to a study based on satellite imagery that was shared with Bloomberg News.

This would be an area almost the size of New York City. It is also nearly half the average annual amount of forest cover that is lost due to changes in land use and illegal logging in the same region, according to WRI calculations.

Some on the ground think the devastation could be even worse. Juan Manuel Herrera, a forest engineer from Campeche, said the state would have potentially had losses much higher than those estimated by the WRI.

Monthly payments are a critical lifeline for some of the poorest communities in a pandemic-stricken country – the rural areas that form the president’s base. Mexico’s economy slumped 8.2% in 2020, while formal employment fell in January compared to the previous year in all areas outside of the northern industrial border states. Social programs are essential to support the president’s Morena party before the June elections, and polls show that voters consider these initiatives to be one of the government’s best achievements.

However, at the local level, environmental damage threatens to outweigh the benefits. In just one village in Campeche, more than two-thirds of the program participants had cut down the forest in order to obtain the benefit, according to one participant.

Antonio, who asked to be identified only by name for fear of repercussions, showed where he and his family had cleared a dense area of ​​trees that included tzalám, or Caribbean walnut, and red chacá, commonly known as gumbo-limbo, to have right to payments.

A Sembrando Vida representative in the village denied that people had cut down trees to enter the program in the area, saying they had used cattle grazing land.

Antonio, for his part, said that they had not touched the grazing land because his cattle needed it. He wanted to keep the forest intact and cut down some small trees to help the others grow, he said, but the program representatives were only looking for cleared land, and he needed the government’s money.

Sembrando Vida’s inconsistencies add to López Obrador’s poor track record in climatic terms. The president has favored the state oil giant Petróleos Mexicanos, known as Pemex, and the state utility company at the expense of private renewable energy projects. He has drawn criticism from various NGOs for building an oil refinery in a mangrove forest and for plans for a tourist railway that would run through the rainforest. The Government of Mexico has joined Russia and Brazil in failing to upgrade their Paris climate commitments ahead of the COP26 summit this fall.

In 2019, López Obrador ignored calls to declare a climate emergency, alluding to the Sembrando Vida program and commenting that he was “very satisfied” with its environmental record. “Everything possible is being done to prevent the forests from being destroyed,” he said at the time. Just last month, he referred to it as a “blessed program” and regularly hails it as the most important reforestation plan in the world.

The project can cite successes, with some 660 million plants planted by the end of 2020. However, the ambitious targets are far from sufficient for the program to be the main factor for Mexico to meet its Paris targets, said Adrián Fernández Bremauntz, executive director of the Mexico Climate Initiative, an NGO focused on the environment.

He also commented that this type of program, if not well designed, can generate perverse incentives.

The payment system has, in effect, created a dilemma for the communities that have lived in these forests for centuries: cut down their habitat or not receive much-needed income.

Bernardo Chankin, a village leader in the Lacandon Jungle in Chiapas, said that less than a third of the families in his village were able to access the program because the community refused to cut down trees. “As Lacandons we are dedicated to conservation,” Chankin said by phone. Now the rivers and wells in his part of Chiapas are drying up due to deforestation, he said.

Others, like José, the Yucatán farmer, say their communities have no choice. “What can we do?” said. “It is the opportunity that there is.”

The government appears to be doing little to ensure the durability of the project. Farmers are not asked to sign contracts, just promising letters, two participants said. The government has not formally registered the areas designated for timber, which creates uncertainty about the granting of the necessary permits to cut down the trees once they mature.

Many farmers say they do not believe they will be encouraged to continue caring for their plantations after 2024 when López Obrador will leave office. Some decide to pocket the government payments and do the bare minimum to avoid exiting the program, arguing that they can simply grow more profitable crops when payments are exhausted.

“There are guys who say: ‘Ah godmother, why are you watering it? Finish the program, cut it down and keep planting soybeans, ‘” said Nancy López, 57, a farmer from Yucatán, proudly displaying a small tree nursery that she will soon plant under the program.

The forest is unstoppable. Where trees have been cut down, new ones come to life in a few months. They quickly outgrow the non-native species that the program often asks its participants to plant, such as tamarind and cacao in Chiapas. However, some participants say they were forced to cut down the new native trees and replant the non-native species that had died from lack of water or too much sun.

Thick and unruly undergrowth sprouts alongside the untamed native trees that play an important role in the ecosystem, protecting young trees from the sun and providing moisture during dry spells. But local managers often force farmers to cut it too to make the land look cleaner.

Not all is lost yet. José Iván Zúñiga, manager of the forestry team at WRI Mexico, applauded the government’s ambition and said the problem was the rush to implement. If done right now and sustained through 2030, the program could sequester two to three times the carbon that was initially lost, he said.

A plant survival rate of 80% would mitigate 3.4-5.5 metric tons of CO2 per year, while a rate of 40% would mean half of these values, the WRI study found. Herrera and his team estimate that only 10-30% of the trees planted in some regions will survive in the longer term.

The “potential of Sembrando Vida is high, but it is important that the program resolve all those pending issues,” said Zúñiga. It is essential that they legally register the parcels of land and ensure that the planted hectares remain in the forest system for at least 30 years. Otherwise, he said, “everything is going to go down.”

There is a general agreement in considering deforestation, and the events associated with it, as phenomena of unquestionable severity, the consequences of which will be reflected in future generations.

As it is a global problem, the issue of deforestation and its economic consequences and its implications for the environment must be assumed as a multinational issue with long-term effects and where the co-responsibility of societies and Governments must be conceived as part of a whole.