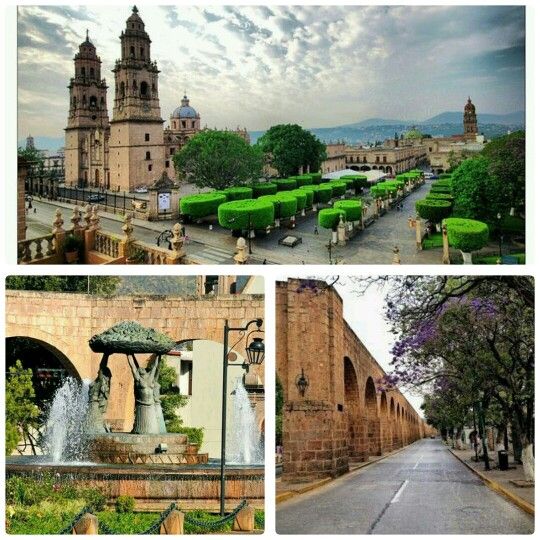 Morelia, the old Valladolid of the viceroyalty, is a beautiful city with splendid religious buildings, palaces, theaters, and other emblematic monuments of colonial architecture in Mexico.

In addition, it brings together all the variety and excellence of Michoacan cuisine, through dishes of pre-Hispanic essence and sweets from all times.

These are the 12 best things to do in the capital of the state of Michoacán de Ocampo.

Morelia is called “the city of the pink quarry” and its historic center magnificently shows the reasons for that name. There are more than 200 historic buildings built in the pink-toned rock found in the quarries in that area of ​​Michoacán. As a curious fact, the historic center of Morelia is the only one that does not have a main square or zócalo among all the Mexican colonial cities. In the traditional town of Morelia, designed according to the best tradition of 16th-century Spanish urban planning, the cathedral, several palaces, the old hospital and other beautiful structures stand out.

The main temple of Morelia is a majestic baroque building in a pink quarry dating from the 18th century. It’s two 67 meter high towers stand out in the architectural landscape of the city and on Saturdays the church is illuminated in a show of light, fireworks, and sound that is expected by visitors. Inside it houses some artistic and religious jewels, such as the monumental organ with 4,600 flutes, the largest in the country, the silver baptismal font, images, and paintings

This imposing aqueduct built in the 18th century to supply Morelia with water is one of the most important and best-preserved civil works in the city. It was built to replace the rudimentary canal built as a supply system in the 16th century and is made up of 253 semicircular arches, with heights exceeding 9 meters. The 1,700-meter aqueduct served until 1910.

Morelia has beautiful palaces that have been the scene of notable events in the history of the Mexican nation. The Government Palace of Michoacán, a beautiful baroque building from the 18th century, was the headquarters of the Tridentino Seminary and its rooms were attended by Agustín de Iturbide and José María Morelos, among other students who would make history. In the Legislative Palace, a 19th century building with French lines, Miguel Hidalgo signed in 1810 the decree to abolish slavery in Mexico.

When the bishop of Michoacán commissioned in the 17th century the construction of this beautiful building with baroque and neoclassical lines to serve as the headquarters of the Episcopal House, he did not imagine that its magnificence would ruin his plans. The community began to question so much Christian luxury in a city with poor health services and the palace was ceded to the Juanine monks, who turned it into a hospital. Curiously, a year after seeing the birth of the first school of Medicine in Michoacán, in 1866 the palace was converted into a hotel, with the name of Los Juaninos in honor of the monks.

6. Get to know the birth house and museum of Morelos

The Mexican patriot José María Morelos y Pavón gives his name to the city of Morelia, where he was born on September 30, 1765, when the town was still called Valladolid. The hero’s native house, with a single floor and two interior courtyards, was originally in the Baroque style when it was built in the 17th century, but reconstruction in 1888 made it neoclassical. In 1965 it became a museum dedicated to Morelos, including a document with his signature and the most important episodes of his career.

This museum, inaugurated in 1886 at the Colegio de San Nicolás, is the oldest in the country excluding Mexico City. It has been operating since 1916 in a beautiful baroque-style house built in the 18th century, which was the residence of notable families, including that of Ana Huarte, wife of Emperor Agustín de Iturbide. The museum is dedicated to the history of Michoacán and among its most valuable works is the monumental painting The Transfer of the Dominican Nuns to their new convent in Valladolid, a superb testimony about the viceregal era in the city.

He offered his first piece on New Year’s Day 1830 under the name of Teatro Coliseo in a function of the Salgado company with the first actress Amada Plata. On June 3, 1861, in the middle of a function, the news arrived of the execution of the liberal leader Melchor Ocampo and the assistants decided to rename the theater. The neo-baroque construction has undergone several modifications, the last in 2000 to improve the acoustics of its majestic 403-seat hall.

9. Meet the Conservatory of Las Rosas

This musical institution opened its doors in 1743, being the first conservatory in America. The building in the historic center where the conservatory currently operates, of stately sobriety, dates from 1595 and has successively been the Dominican Convent of Santa Catalina de Siena, the Colegio de Santa Rosa, the Higher School of Sacred Music, and finally the Conservatory of Las Rosas. It is the seat of the Morelia Children’s Choir and the city’s Chamber Orchestra.

10. Let yourself be seduced by the Sweet Museum

Morelia is a city of delicious sweets. La Dulcería de la Calle Real is an establishment located on Avenida Francisco Madero, Oriente440, which offers a variety of more than 300 Michoacan and Mexican sweets, while it tells in the 5 rooms of its museum the history of the sweet in Mexico, from its elaboration original handcrafted in convents and monasteries until the industrialization of manufacturing. It is the most irresistible museum in Morelia.

11. Have fun at the Benito Juárez Zoo

The Benito Juárez de Morelia Zoo is one of the largest in Latin America due to the number of species represented and the number of specimens. Occasionally an extraordinary event occurs at the zoo, such as the birth in January 2016 of a caracal, believed to be the first time that one of these beautiful cats has been born in captivity in Mexico. In December 2015, the births of a scimitar-horned antelope, a Lechwe antelope, and a llama had occurred, very rare events in winter. And it is that anything can happen in such a rich and varied zoo.

The traditional cuisine of Michoacán is strongly influenced by the pre-Columbian culinary customs of the Purépecha people, adjusted with the European culinary art led by the Spanish conquerors. Among the most representative dishes of regional cuisine are cornudas, tamales with cheese and cream; Tarascan soup, prepared with ground beans, pasilla chili and tomato puree; and the Morelian enchiladas or placeras. Other local delicacies are the Michoacán-style carnitas, the uchepos, and the aporreadillo.

Morelia, the Pink City, awaits you with these 12 attractions and many more.