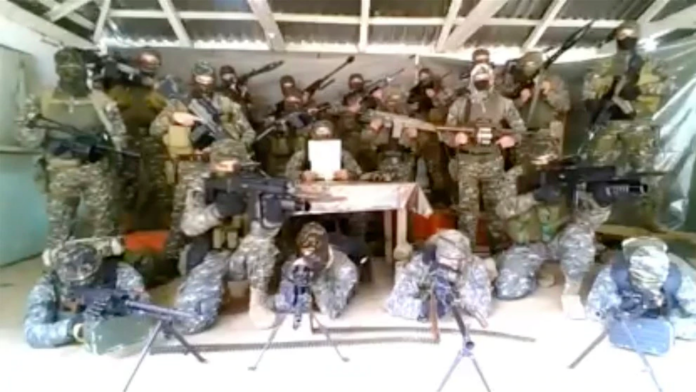 Through a video broadcast on social networks, alleged members of the Jalisco Nueva Generación Cartel (CJNG), threaten the Army and National Guard (GN) of Mexico to cut off the support they say they give to the self-defense group in the state from Michoacan.

“To you National Guard and guachos who are in Michoacán, I am going to give you some advice and a warning: do not stop seeing the asshole on the part of the fucking Grandfather, the fucking Viagras, the fucking Kiro, the fucking Hipólito Mora and all those who make up the filthy United Cartels and go in support of them to hit my people ”was the threat of the supposed member of the CJNG who spoke to the camera.

In addition, to the GN and the military operating in the region, the character issued an ultimatum: “Although my war is not with the government, if you National Guard and guachos continue to support you, we are going to give you a taste of your own chocolate. ”.

AGUILILLA, MICHOACÁN, JULY 04, 2021.- Located 270 kilometers southwest of Morelia, the municipality of Agulilla was taken over by elements of the Jalisco Nueva Generación Cartel (CJNG) on April 5, things are far from settling down in Tierra Caliente. Despite the fact that the government of Andrés Manuel López Obrador ordered the forces of the National Guard and the Army to be deployed, the armed struggle between the Jalisco Nueva Generación Cartel (CJNG) and the United Cartels continues. PHOTO: CUARTOSCURO.COM

Who are the three people that the apparent CJNG member threatens and designates as members of the United Cartels?

Miguel Ángel Gutiérrez Aguilar “El Kiro” was the center of a series of confrontations that devastated Tierra Caliente last week. This after he was kidnapped by members of the criminal group led by Nemesio Oseguera Cervantes “El Mencho” on July 11.

The self-defense groups of Michoacán that recognize “El Kiro” as their founder, broke into a building near the municipal seat of Buenavista to rescue him. After the confrontation, in which they repelled the aggressions of the CJNG that tried to prevent the rescue, they managed to extract Miguel Ángel Gutiérrez Aguilar and his family.

“El Kiro” was transferred to a hospital since he had not consumed food, water or the medicines he needs to treat a series of chronic conditions that afflict him. Already in the health center, he was diagnosed with complications of hypertension, diabetes, and heart problems. In addition, he was left with psychological consequences that have not allowed him to talk about what happened during his kidnapping.

Miguel Ángel is also known for being a trusted element of Juan José Farías Álvarez “El Abuelo”, another former member of the self-defense groups who is currently wanted by the administration of the governor of Michoacán, Silvano Aureoles. He was identified as a CJNG lieutenant, however, he is now threatened by the same criminal organization.

More recently, “El Abuelo” is recognized as the leader of the Tepalcatepec Cartel, which has starred in the confrontations with the CJNG yesterday. The inhabitants of the municipality of Tepalcatepec are summoned to the interior of the town, surrounded by roadblocks and about 200 members of the cartel of the four letters.

Juan José Farias is pointed out by the CJNG during the video of allegedly raping and murdering “those innocent girls, I don’t think it will take long for all the people of Tepalcatepec to turn their backs on you.”

TEPALCATEPEC, MICHOACÁN. APRIL 10, 2015.- Federal authorities accused him in 2009 of being a boss of the Los Valencia cartel, which operated in the Tierra Caliente area, in Michoacán. After more than two years of trial, Juan José Farías Álvarez, the grandfather, was only able to prove the illegal possession of a weapon and the possession of a package with drugs, crimes for which he served a three-year sentence. At present he is one of the leaders of the now-called rural forces. PHOTO: JUAN JOSÉ ESTRADA SERAFÍN /CUARTOSCURO.COM

“El Kiro” has also served as a link between “El Abuelo” and Hipólito Mora. The latter is also recognized as a former leader and founder of the self-defense groups of Michoacán. More recently, he stood out for his intention to run for governor of Michoacán for the Social Encounter Party (PES).

In 2013 he founded the La Ruana self-defense group . In that year, along with the other two characters mentioned above, these groups of armed civilians were formed to dispute the territory with the Knights Templar who were trying to control the region.

Now, Hipólito Mora has separated himself from the self-defense groups in his intention to pursue a political career. Although he does acknowledge having had relationships with “El Kiro” whom he characterizes as an honest person. On the other hand, he claims not to know Juan José Farias “El Abuelo”.