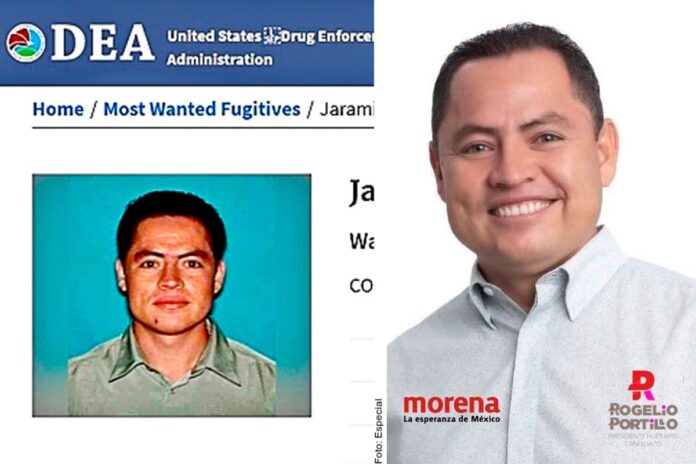 The former candidate of Morena and the PT to govern the Huetamo mayor’s office, Rogelio Portillo Jaramillo, wanted by the United States Anti-Drug Agency (DEA) for conspiracy and possible links with the Jalisco Nueva Generación Cartel, lost the election to the alliance formed by the PAN and PRD.

The winner in that municipality was Pablo Varona Estrada with 7,357 votes, just 644 more than the 6,713 obtained by Portillo Jaramillo, who was in second position, according to the Preliminary Election Results Program (PREP).

His inclusion in the list of the most wanted fugitives by the DEA transcended since the end of April and continues in force on the US agency’s website.

The 42-year-old morenista, originally from Zirándaro de los Chávez, Guerrero, is known as El Canario for the musical activity to which his father, Edilberto Portillo Mendoza, founder of the regional music group Beto y sus Canarios, is dedicated.

The search file that keeps him as a fugitive from justice and in the “Most Wanted” section by the DEA since 2019, indicates him as “armed and dangerous”, in addition to detailing that his last known address was in Houston, Texas. He is also pointed out of having ties with the Jalisco Nueva Generación Cartel.

Even with this background, El Canario was able to register as a candidate for mayor of Huetamo under the shelter of the Together We Will Make History alliance, made up of Morena and PT, to participate in the elections that were held on June 6.

Portillo Jaramillo even took his proselytizing campaign to social networks such as Tik Tok and Facebook, where he consistently promoted his candidacy.

“El Canario” is the nephew of the mayor of Morena in Zirándaro de los Chávez, Guerrero, Gregorio Portillo Mendoza. This, in turn, is the brother of Marcelino Portillo Mendoza, who is also on the DEA’s most wanted fugitives list.

Despite these antecedents, Morena did not take any action or initiate a process or investigation to review the candidacy of Portillo Jaramillo.

On May 11, the party’s delegate in the entity, Raúl Morón Orozco, declared that if there was an arrest warrant against the then applicant, it should be carried out.

In an exclusive interview for El Sol de Morelia, Rogelio Portillo defended himself and said that no one has sought him out from the DEA and that if some of his relatives may be involved in illegal activities, “we should ask them.”

Contacted by phone, he affirmed that “the people mentioned (on the DEA website) are indeed some kind of family, but they are not my brothers, except for my father… Maybe at the time my father had some situation, but I don’t have to answer that “, he asserted.

Edilberto Portillo, Rogelio’s father, was prosecuted for drug trafficking, although he is currently at large.

Regarding his appearance on the list, the morenista denied being guilty of any crime, without providing any evidence beyond stating that he has a letter of no criminal record, which is part of the documents requested by the National Electoral Institute (INE) and the Electoral Institute of Michoacán (IEM) as a requirement to register candidacies.