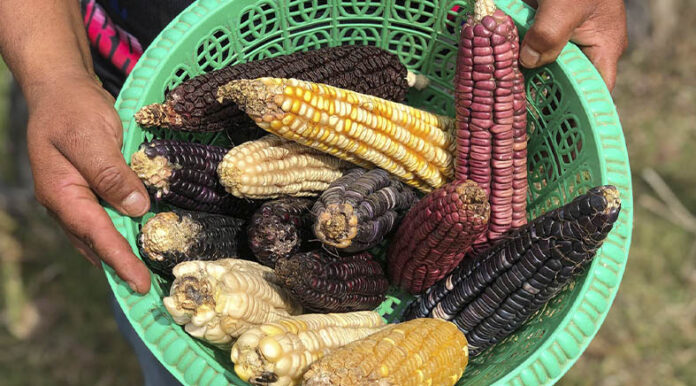 This group seeks to give value from the field to the table with nixtamalized tortillas of native and agroecological corn.

Francisco Rodríguez Sánchez is from Uricho, Michoacán. A day of work in your polyculture field is an arduous effort that is achieved as a family. María Sánchez, his mother, and Santiago Rodríguez, his father, taught him about the cornfield, just as his grandparents transmitted knowledge that is strengthened in practice, by putting their hands to the ground, by observing.

Their nature is known, it is the one that provides food and sustenance. The countryside continues its cycles, people adapt despite the pandemic. They sow at the end of June and the beginning of July, and if the rains come forward they wait for three heavy downpours to fall because the ground must be very humid because if not, the seeds will not germinate – and that is what they call  ” desheating” -.

They harvest, depending on the need, from the end of October to the end of January. The shingle, which is when the corn plant hangs and forms a kind of vegetable roof, allows excess water to drain. They also apply crop rotation and use green manures so as not to wear down the soil, so that it has necessary nutrients such as nitrogen.

They use janamargo for forage; They intersperse legumes such as lentils, which  ” are seasoned” in April and May, and beans, which are hand-harvested. On the way, one finds wild grapes, prickly pear flower, white and red nopal, as well as ash quelite and mortanza, which serves as food for the birds and with what cherimoyas were previously cooked with.

Francisco studied sustainable development, he is also dedicated to masonry, although he says that the heaviest job he has is desquelitar. “ That is titanic: you use a team, then a machete to the ground, which is a good technique to avoid taking associated plants. We are a milpa system ”, he assures. He has not accepted those chemical herbicides that they want to sell him but uses acetic acid, brown sugar, cola, and yeast, in order to spray weeds with care.

He is one of the farmers that makes a team with Red Tsiri, a project that began in 2009 from the collaboration of researchers and technicians from the Interdisciplinary Group of Appropriate Rural Technology (GIRA) and the Center for Environmental Geography Research at UNAM, Campus Morelia (CIGA).

Its objective is to create a link without intermediaries between producers and local suppliers of organic and native corn of excellent quality, tortilla makers from the Pátzcuaro-Zirahuén region, and supportive consumers. Through the sale of artisan tortillas and foods made with corn, added value is given to the grain, the people involved are better paid and diversified markets are sought.

Marta Astier Calderón, the founder of the project and researcher, has been researching the agroecological production of corn and its importance since 2005. She explains that there is a strong attachment to planting native races in the area of ​​the Lake Pátzcuaro and Zirahuén Basin, despite the fact that it is surrounded by states such as Guanajuato and Jalisco that are large producers of hybrid corn.

This local maize has survived because there is demand mainly from women who are the transformers. They make tortillas, atoles, gorditas, tamales, and other dishes for their homes or to sell. And whether they use the corn from their crops or buy it in the community, they prefer Creole to others: that is of vital importance.

” They are single or widowed, the most marginal population in the communities, despite the fact that they play a fundamental role in the conservation of agriculture,” says Marta. Hence, Red Tsiri is necessarily linked with around 10 tortilla makers and other women who make this food both by hand and by a machine of different sizes –nixtamalized and agroecological-, as well as pinole corn cookies, ponteduros, toasts, and more delicacies.

Some of the breeds that exist in this territory, Marta lists, are the Purépecha, which was previously called blue chalqueño and is distinguished by its almost black tone and its large ear, which also has important nutritional properties such as antioxidants and starch.

There is also a plantation of pozolero, which is the cacahuacintle, common in more areas of Mexico. Others are the western corn, the conical pink and the white chalqueño and three that are grown less and less in this region: the sweet, the mushito and the pepitilla. One that Francisco shows in the space where they store the corn in his home is the charapiti, of intense red color.

Joel Sánchez, one of the workers on whom Francisco relies, says that with this red corn he makes chical, a sweet with piloncillo that is only prepared for Christmas and Palm Sunday at Easter and that is also used to make ponteduros, those sweets of roasted corn. ” It’s delicious on the cob, so just boiled dry,” he suggests.

Red Tsiri transforms seven tons of blue corn and half a ton of white corn per year. The corn is paid to the producers at $ 9 pesos per kilo: if they sold it to individuals, they would buy it from them at $ 5.50.

For her part, Marta Rodríguez, one of the leaders of the women’s tortilla groups in Uricho, narrates that she is over 60 years old and has always planted and prepared food-related to the countryside. He gets up at three in the morning to light the wood for the nixtamal, cooks his stews, makes his tortillas and gorditas, and has everything ready for his deliveries. He ends his days at eleven o’clock at night or more.

On the patio, you can see her corn cob and the ears that she keeps. Use the bay beans that she grows, as well as quelites in season and red chili. She had three children and talks that two of them also know how to cook. Before being with Red Tsiri, she went alone to sell to Pátzcuaro, she no longer does it because here they pay her better for her work, and there the competition is greater. A dozen tortillas by hand usually sell for between $ 12 and $ 15 pesos on his own, and with the network, he sells them for $ 18.

Remember that before there were ducks and they ate them in guajillo chili. Now, pork, bean tamales, enfrijoladas, atole de pinole, quesadillas and churipo de res or mole are more common when it is the feast of San Francisco de Asis, on October 4.

Another contribution that GIRA has made in its work for rural renewable energy in relation to cooking is the Patsari stoves, an alternative to conserve forests and reduce respiratory diseases.

Marta has one and says that before she had tremendous smoke in her house and now with this device, which has implemented extraction chimneys, she uses less firewood. In particular, oak is the one he prefers, but when there is none, he uses pine and cobs. The comales were adapted in design, according to what the women needed and asked for.

There are five restaurants that collaborate with this network, says Marta Astier. Some like Lu Cocina Michoacana and Chango in Morelia, Michoacán has been constant buyers and promoters of what Red Tsiri has been promoting for years. The Tierra Mestiza store in León, Guanajuato offers its products to the public and Panoli, a Morelian chain of bakeries, buys flour and pinole from them.

With the health crisis caused by the coronavirus for several months, orders were reduced, although solidarity consumers remained faithful to them. Little by little this 2021, they are resuming the sales flow that they had before March 2020. There is currently a WhatsApp group that takes orders for deliveries on Mondays and Wednesdays in some parts of that city. More than 200 families, two schools, and other organic product stores are the ones who keep this group alive.

“ Red Tsiri has to grow. It must be a sustainable business at an economic level, not only environmentally, and we must take a leap to seek more market and expand the volume of sales, “he adds. One of its next steps is to implement new technologies, buy machinery, look for those interested in exporting and formalize as a cooperative in order to receive more resources.

This agroecologist believes that the sensitivity of the local consumer, middle and upper class, as well as that of the community and neighborhood, has increased with respect to the consumption of tortillas, but she thinks that it is necessary to reach those with fewer resources. Several emblematic restaurants in Mexico are doing them from another perspective and this has led to an increase in the appreciation of the tortilla culture where there was none, among the elites.

However, she expresses that there are several pending challenges. One is the differentiation in relation to whether native and agroecological maize is used, that is, that people know and assume that the option is that chemicals are not used from planting to table, as well as that there are better public policies and subsidies to those who are related to native corn and its derivatives since the farmer is still paid very little.

Likewise, support is needed for those who have associated businesses such as tortillerías, in order to stop depending on the large agro-industrial empires. Other points would be that public purchases fight for a diet that does include the milpa and that better reviews are made to avoid food waste.

Also, notice that tortillas are becoming a gourmet product. “ There is just an elitization of the tortilla. There is also a problem there because not all people will be able to eat them but only who can pay for them ”, he says.

“ Consumers are very ignorant but yes, we love a good omelette, the properties it has. It is not known as much to distinguish if they are from nixtamal or native corn, but we love the taste. We are going to publish an academic article soon on sensory analysis of the tortilla with these findings, ”Marta shares and also adds that it is recognized and appreciated how they taste and smell if they can be rolled up, if they last in the fridge if you heat them and they’re still soft, and so on.

Marta adds that more information is needed in this regard, but that above all it must be recovered and remembered what natural corn foods should taste like since they are in the memory of some generations in both rural and urban populations.

” And this is on the tightrope because now people consume a very different tortilla to which they add sugar, colorings, and preservatives, and in urban areas, they run the risk of getting used to that tortilla. There is going to be a sector that is no longer going to like the other one ”, he concludes. If you want to contact them, call them at 434 104 98 40 and find them on Facebook as  Red Tsiri.