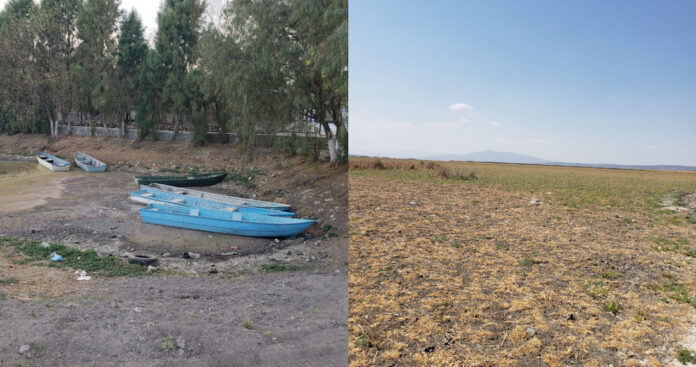 Lake Cuitzeo is the second largest in Mexico, one of the oldest in the world, and supports around four thousand families. However, the construction of transport routes, the change in land use in the basin where it is located, as well as the demographic growth has had a fatal impact on this lake body. Residents and researchers who seek to avoid this deterioration have noticed the indifference of Conagua and Sermanat.

The importance of Lake Cuitzeo is vital for the country. It is a lake body settled mostly in Michoacán, although it also extends to Guanajuato. It is the second largest body of natural water in the Mexican Republic, behind Lake Chapala, in Jalisco. Its formation dates back eight million years, which makes it one of the oldest lakes in the world. However, none of that has served to stop its drying out.

The image that the lake has shown recently has turned on the alerts of the inhabitants of the area. It is no wonder that around four thousand families depend on it, whose economic activities are linked to their sustainability. The reason for this situation is understood from the human activities that have been reducing the life of this lake system.

The construction of roads, the deforestation of the basin, and the change in its land use that has opted for avocado and berry orchards, as well as other buildings such as subdivisions and the population growth that has intensified the use of water have had an important impact to Cuitzeo. To this must be added the indifference of the National Water Commission (Conagua) and the Ministry of the Environment and Natural Resources (Semarnat), who denounce the inhabitants for the Lake to live.

“The problem for us is distressing because if we lose Cuitzeo, the second natural body of water in the Mexican Republic, then why don’t we also lose Chapala or why don’t we also lose Pátzcuaro. We are going to set a very shameful precedent, that we are losing water in Mexico when we are a country that is not privileged in aquatic resources, ”Dr. Arturo Chacón Torres, dean researcher at the Institute of Natural Resources Research ( INIRENA) of the Michoacan University of San Nicolás de Hidalgo.

The image that the lake has shown recently, has turned on the alerts of the inhabitants of the area. Photo: María Di Paola Blum, Cuartoscuro.

Chacón Torres explained that the Cuitzeo receives less and less water, which has led to droughts. He mentions that while before 30 percent of its surface dried – during the dry period that includes January, February, March, and part of April – to date it has 60 percent of its surface dry. This, in turn, gives rise to another problem: the generation of dust blisters that cause public health problems that cause gastrointestinal, bronchopulmonary, ophthalmological, and skin diseases. According to the researcher, studies carried out during the drought show that the inhabitants spend, together, up to seven million pesos on medicines.

“Not even the Public Health institutions pay attention to it, they do not attend to it, they do not even monitor it and on the other hand Conagua has not even made the hydrological balance, they have not delimited the polygon, and if they delimited it they have not published it, the polygon that corresponds to the federal area of ​​the lake and therefore they are also favoring invasions to federal lands that are vital for the lake because it is the area from which it receives water, and at the same time they have not made the hydrological balance that guarantees what that we call ecological flow, that is, the minimum flow of water that the lake requires to survive. So, under these conditions, a criminal public health problem is being generated due to the negligence of Conagua and the negligence of Semarnat in not decreeing an ecological restoration zone ”,

Getulia Maycotte, secretary general of the Friends of the Lake Cuitzeo association, pointed out that for 26 years they have denounced the invasion of the lake before the “indolent gaze” of the municipal authorities and the National Water Commission.

“We began to see that and we began to file complaints. Neighbors began to say that it was invaded and we invited them to make the complaint, we accompanied them, and the National Water Commission never did anything, “he said in an interview.

These same arguments have been used to demand through an application on Change.org the ecological restoration and economic recovery in Lake Cuitzeo. So far, the petition has more than 20,000 signatures.

THE INDIFFERENCE OF CONAGUA AND SEMARNAT DENOUNCED

Sinemargo sought out Conagua and Semarnat to find out their position regarding the allegations that they have not responded to the requests to carry out the ecological restoration of Lake Cuitzeo, but at the end of this edition, no response was obtained from these agencies.

Dr. Chacón recalled that in January 2019 a point of agreement was issued in the Congress of the Union, where it was recommended that the Lake be decreed as an ecological restoration area. “This request has been ignored by Conagua and has been ignored by Semarnat in an arbitrary way, they only answer that studies are required to justify the restoration decree. You don’t need to be a great thinker or a great researcher to see the situation in which Cuitzeo finds itself and to decree the ecological restoration zone ”, he pointed out.

In the document referred to by the INIRENA researcher, the Permanent Commission of the Congress of the Union pointed out that in the last decade the basin has presented a considerable increase in its population, according to data from the National Institute of Statistics and Geography (Inegi) 2015 At that time there were around one million 202 thousand 896 people, that is, a little more than a quarter of the population of the state of Michoacán, which – the text refers – has led to a growing increase in the consumption of natural resources and therefore the deterioration of the basin.

The point of the agreement also warned of increasingly high production of organic waste, which is dumped in the different ecosystems of the basin, mostly without receiving adequate treatment, which “constitutes a scenario that endangers the balance of the ecosystem of the basin, also reducing the quality of life of the communities due to environmental, economic and public health impacts ”.

“The loss and degradation of Lake Cuitzeo have as causes, among the main ones, the invasion of land to change the use of soil, urban pollution, agricultural return water, silt hauling, the overexploitation of groundwater, the construction of Civil works such as the Mexico-Guadalajara highway and the introduction of houses on the shores of the lake, coupled with this, the silt caused by the deforestation of the basin causes the hypertrophy of the lake, on the other hand, the proliferating presence of aquatic weeds that currently cover approximately 13 thousand hectares; which prevents free navigation and fishing, in addition to the lily that frequently destroys their catching gear (nets), ecological imbalance and desiccation due to the natural life cycle of lakes and dry periods of precipitation ”

THE DROUGHT IS EXTENDED

Dr. Chacón states that the Lake’s normal drought period includes the months of January, February, March, and part of April. During this time, the lake has to resist until the rains arrive in the first week of May and formally settle on June 15, which is why it indicates that the Lake of Cuitzeo in the month of December has to have water, although at the end of 2020 did not happen like that.

“Since November it started to dry out, so if I already know what will happen to the Lake when there are rain problems, I imagine that the Conagua with all its infrastructure, meteorological, hydrological, and others, should have had a forecast, a drought plan that does not exist ”, he points out.

The researcher indicated that the extinction of the Lake would be to speak of a total desiccation caused by man, however he said he hoped that if the ecological restoration that the authorities are demanding is done, this can be avoided.

LACK OF SUPPORT TO FISHERMEN

To all this context of human depredation and lack of response from authorities for the conservation of the lake body, the impact that the deterioration of the Lake has on the thousands of families whose economic activities are based on fishing and other related activities.

For Dr. Arturo Chacón there is “total institutional negligence” since the ecological restoration they request – based on Article 78 of the General Law of Ecological Balance and Environmental Protection – establishes that Semarnat must in these circumstances decree zones of ecological restoration and it has to be done in collaboration with the inhabitants of the riverbank, which means generating temporary employment.

“In those areas that present processes of degradation or desertification, or serious ecological imbalances, the Secretariat shall formulate and execute ecological restoration programs, in order to carry out the necessary actions for the recovery and reestablishment of the conditions that propitiate the evolution and continuity of the natural processes that developed in it. In the formulation, execution, and follow-up of said programs, the Secretariat shall promote the participation of the owners, possessors, social, public or private organizations, indigenous peoples, local governments, and other interested persons ”, reads the article referred to by Chacón .

In this sense, Dr. Arturo Chacón emphasizes that if Conagua and Semarnat are simply indifferent to a rescue strategy, what the community of that area faces is a very serious problem of social marginalization, a problem of public health with dustbins, and an economic problem.

Maycotte said that although there are good expectations from the administration of President Andrés Manuel López Obrador, they maintain their demands for the Cuitzeo Lake Basin Council to be restored to function as it should, as well as a nursery for endemic plants such as the mesquite.

“We are also asking that the Congress of the Union authorize a labeled resource for the Morelia wastewater treatment plant, the waters reach Lake Cuitzeo dirty. It will be very beneficial that Morelia has its treatment plant at 100 percent and clean water arrives and that will benefit everyone, the fishermen because there will be clean fish production again, ”he said.