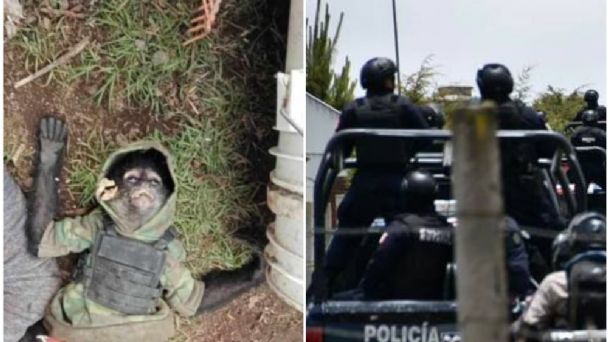 The primate ended up with his arms outstretched as if holding the young man who was carrying him by the shoulders; he was wearing a ballistic vest, a camouflaged fleece jacket, and a diaper.

One of the 11 people killed on Tuesday by authorities in the confrontation in the municipality of Texcaltitlán, State of Mexico, was carrying a monkey that also died during the shooting.

The animal was characterized as a hitman. He was wearing a ballistic vest, a camouflaged fleece jacket and a diaper.

Its owner, a young man in his 20s, an alleged member of the La Familia Michoacana criminal group, was found dead with several bullet wounds and with the primate in the chest.

The black-furred animal was wearing a military green sweatshirt and what looked like a bulletproof vest; The ape was injured in the crossfire, so tonight the Mexican prosecutor’s office also confirmed his death.

The primate ended up with his arms outstretched as if holding the young man who was carrying him by the shoulders.

What happened in Texcaltitlán, Edomex?

The confrontation occurred when members of the Attorney General’s Office of the State of Mexico and members of the National Guard met armed civilians who were members of La Familia Michoacana when they were carrying out an operation.

At the scene of the events, 10 men were left dead, another died in a hospital, at least 10 more were detained, and three of them remain under medical observation after being injured.

The authorities seized various firearms, vehicles and cartridges; They also found out that one of the criminals had a monkey with him which lost its life during the shooting.

The authorities will carry out the necropsy of the animal under the charge of a specialist veterinary doctor from the Faculty of Veterinary Medicine and Zootechnics of the Autonomous University of the State of Mexico (UAEMex).

In addition to that, the probable illicit environmental nature or trafficking of protected species will also be investigated.

Is your American or Canadian car illegally in Mexico? Amnesty program now available to legalize your vehicle