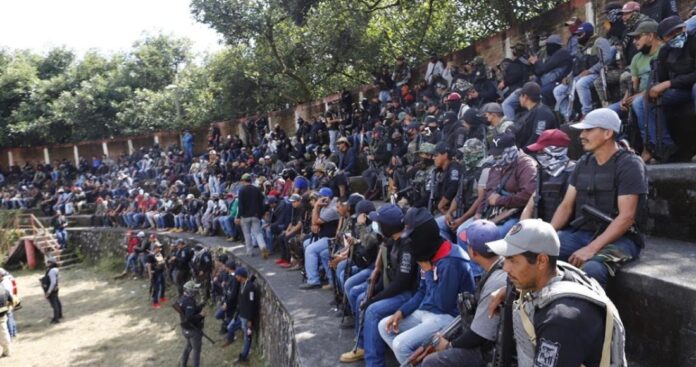 Aboard about 50 trucks, about 400 men armed with high-caliber weapons arrived at the San Andrés bullring.

The group of armed civilians calling themselves “Pueblos Unidos” took over the municipality of Ziracuaretiro, in the western state of Michoacán, to expand their area of ​​influence in the struggle they say having undertaken against organized crime.

Aboard about 50 trucks, about 400 men armed with high-caliber weapons arrived at the San Andrés bullring, in Ziracuaretiro, where they held a meeting with representatives of various social sectors, reported the Mexican portal Debate.

At the meeting, they discussed strategies to deal with organized crime in the area, where producers of various items such as avocado, mango and guava are constantly extorted.

“Pueblos Unidos” is a group that was formed in August 2020 to defend itself against drug trafficking cartels in the Michoacan municipalities of Ario de Rosales, Salvador Escalante, Nuevo Urecho and Taretan; then they spread to Pátzcuaro, Quiroga and Cuitzeo, and now to Ziracuaretiro.

In principle, the group would be made up of three thousand avocado and blackberry producers, who denounce that the criminal groups Los Viagras and the Jalisco Nueva Generación Cartel (CJNG) operate in the area where they live.

“We still have to continue taking care of our territories and at the moment in which Michoacán is pacified, at that moment we will begin to put away our weapons; I see it still far away, ”said another member of the group.

On June 29, the then Secretary of Public Security of Michoacán, Israel Patron, reported that these self-defense groups would be disarmed and that with these actions, the people are “violating the Federal Law on Firearms.”