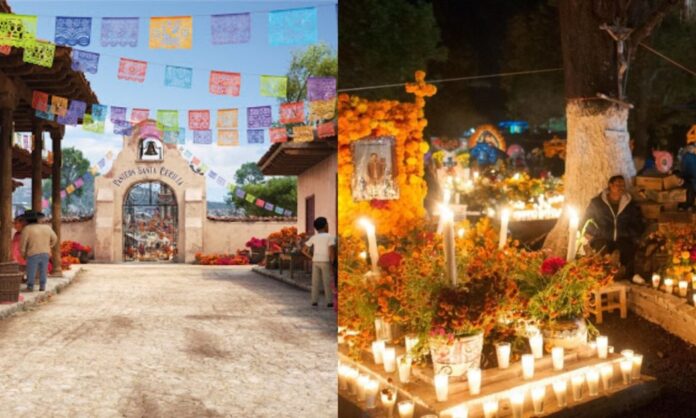 Let’s take a tour of Michoacán, through these tapes:

A 2018 film, directed by Analeine Cal y Mayor, by Michoacan producer Ignacio Martínez Cásares, portrays the key moment in the career of a singer, who finds out that her mother is ill and has as a last wish to reunite her family sooner die. It is for this reason that the protagonist returns to the town where she was exiled 10 years ago and must face her family, to understand that forgiveness is the key that will allow her to live fully.

This film sought to portray a different Michoacán, one of sounds, colors and aromas; taking as scenarios the towns of Santa Clara del Cobre, Pátzcuaro, Zirahuén and Morelia; In addition, it reflected key elements such as the traditional clothing of the state or its gastronomy, with the delicious uchepos. Michoacan handicrafts could not be absent in history, since the father of the protagonist is dedicated to creating copper vessels, just as the artisans of the state do.

It is available on the streaming platform, Netflix, so that from your home you can discover other corners of Michoacán.

Directed by the Mexican Sebastián Silva, it tells us how a pessimistic host of a children’s radio program refuses to help a child who believes it is possible to travel on “the ship” to see the sea, as his last wish before he dies.

This 2019 film was filmed mainly in Pátzcuaro, however, it also shows scenes from Morelia and Uruapan, a film that portrays the beauty and positive side of Michoacán.

Starring Pablo Cruz, who also wrote the script, “La nave”, it shows the values ​​of human beings; how a community can come together for a good cause, and how despite adversity, the best attitude is shown in life, that is why Michoacán was considered the ideal setting to carry out this story.

From the Belgian filmmaker Gust Van den Berghe, “ Lucifer ” is a film that deals with the fall that this being has from heaven to hell, where, in his passage through the earthly plane, he falls into a small town in Michoacán where Lupita and his grandchildren María and Emmanuel. Lucifer transforms the lives of these three characters, and of the entire Michoacan community, as many believe that he is a divine being.

Released in 2014, “Lucifer” was filmed in  Angahuan, a Purépecha community in the municipality of Uruapan, about what was once the town of San Juan Parangaricutiro, so that, in addition to showing the magical streets of this town, the film also captures the beauty of the Paricutín volcano. Its cast includes the inhabitants of the indigenous community, such as the renowned traditional cook teacher Juana Bravo Lázaro.

“Lucifer” is part of a trilogy where the central axis is human perception of the world around them, the first part was “Little Baby Jesus of Flandr”, while the second was called “Blue Bird”.

An animated Disney Pixar film that pays tribute to the Mexican tradition of the Day of the Dead and tells the story of Miguel, a boy who takes a trip to the Land of the Dead to discover the truth of his family past.

As we know, Michoacán is one of the destinations that best preserves the tradition of Noche de Muertos, which is why the creators were inspired by the Purépecha communities to capture this custom. Santa Fe de la Laguna, Pátzcuaro and Tzintzuntzan are some of the Michoacan communities that were captured in the film. In addition, “Coco” portrays the handicrafts of Michoacán, such as the emblematic guitars of Paracho or the decorated kitchen utensils in Capula.

These films show the natural wealth, culture, traditions and heritage that this magnificent state has and are an excellent option for you to enjoy a little piece of Michoacán in a different way.