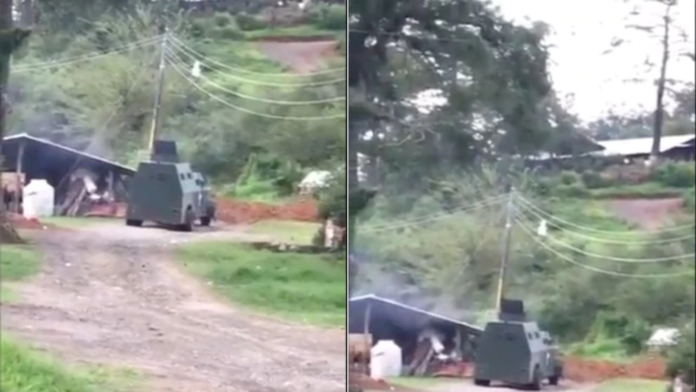 With violence, the cartel led by Nemesio Oseguera Cervantes, El Mencho, tries to accumulate territory in the central Mexican entity

The violence in Michoacán —which is beginning to seem eternal— is once again the protagonist of the conversations of the residents, who warn that the Jalisco Nueva Generación Cartel (CJNG) continues its attempt to control the strip between the mountains and the coast of the entity.

Last Tuesday, August 3, a command of the Nemesio Oseguera Cervantes organization, El Mencho, entered the municipality of Coalcomán, whose inhabitants have denounced that no authority, nor the 65th Infantry Battalion, has acted in this escalation of violence.

For a few months, the Jalisco Cartel has been advancing in Michoacán with its armored vehicles and high-voltage weapons. In an act of slowing down their pace, groups of armed civilians have cut off their path by destroying roads and burning trucks.

The self-defense groups of Tepalcatepec, another municipality in Michoacán, have responded to the aggressions of the CJNG who, they say, are armed with weapons of caliber 50, 20 millimeters, drones, and trucks with homemade armor known as monsters.

The CJNG advances while the population remains captive. The region’s self-defense groups have warned that the cartel is no longer targeting them, but the civilian population, as a strategy of terror.

In addition to this, the hosts of Mencho have used social networks and WhatsApp messages to launch threats against those who seek to challenge them.

On Thursday, August 5, it was reported on alleged destruction of the highway that goes from Coalcomán to Tepalcatepec. These actions were said to have been perpetrated by members of the rival group, the United Cartels, who on more than one occasion have been singled out for being supported by the self-defense groups.

This group of armed civilians is the only one who has dared to challenge the cartel of the four letters, although the authorities, including the governor of Michoacán Silvano Aureoles, have doubted its origin. “We are mapping everything, to prevent these criminal cells disguising themselves as self-defense groups, and begin to want to impose rules, we are not going to allow it, that is, the matter is that simple,” he said at an impromptu press conference.

A few months ago, the self-defense groups announced their return to be able to defend themselves against the organized crime cartels that take away their lands and take their own to be recruited as hitmen. Faced with the dilemma of abandoning their villages, which several thousand are doing, others have decided to defend themselves with weapons in hand.

The newspaper El Universal reported that in recent days of violence in Tepalcatepec, seven residents have been injured, in addition to an indefinite number of deaths, presumably members of the United Cartels. The information will be released on the account of the Council of Self-defense and Community Guards in Michoacán.

The villagers have warned that for three weeks the clashes have intensified so that the town is in exile.