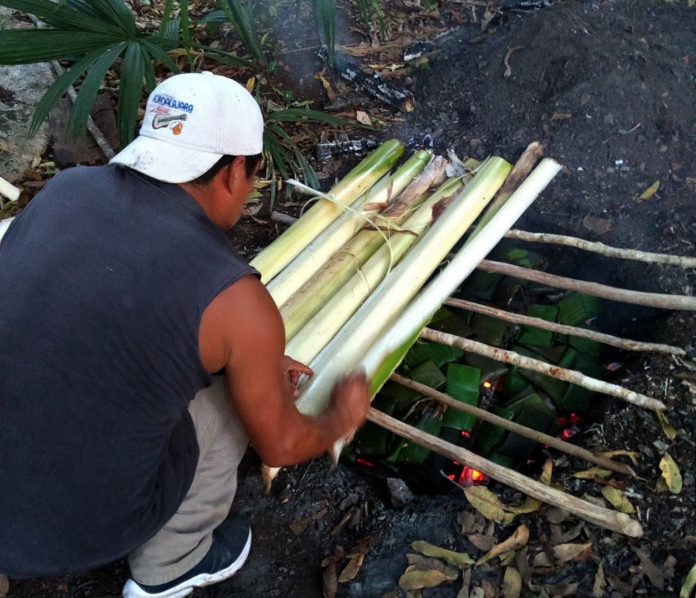 The codzobes and chachacdamientos are a kind of tamales made in pib, whose tradition is protected by the ch’ocoves, a group of men and women who try to keep alive the traditional recipes of the Mayan area in the municipality of Lázaro Cárdenas, Quintana Roo. These dishes, similar to the tamales that everyone knows, are made with traditional ingredients such as holy leaf and banana.

Concerned about keeping the gastronomy of the Mayan region current, Roberto Mex Chimal, by trade as a communicator, talks about the elaboration of codzobes, whose preparation includes the holy leaf or ma’k’ool’an and ibes (beans), ground seed, chives, ground chili, and habanero.

The corn dough or powdered corn flour is boiled or parboiled with the ibes, which are prepared refried. Then you must add the chives, the ground seed, the chili and stir it. They later add habanero pepper to taste and mix.

“The holy sheet is cleaned and we spread it out; On that sheet we torte the dough until it is very thin and we roll it so that it is like codzobito, it is like a golden taco, and the buried food is prepared: we put the stones and wait for them to be hot, spread and before closing it we put some banana leaves and cover ”, describes Roberto Mex.

Depending on the taste, it is left golden or not so much, it is expected between one or an hour and a half and they are accompanied with the drink of your choice.

To prepare the chachacuaje they add red recado to the dough until it takes on a reddish color – called c’ool – and it is mixed with chicken meat or shredded pork, previously prepared with tomato and onion, and wrapped in roasted banana leaf.

“The same procedure is done in the pib (oven under the ground), many times they are confused with small steamers, but those are boiled, they are baked (…) they do not taste the same as when they are cooked in a normal oven, their flavor is very characteristic ”, he details.

The unfortunate thing, according to Roberto Mex, is that these recipes have been lost from generation to generation, so the Ch’ocoves, who are a group of organized people, fight to make traditions prevail and the correct way to prepare these recipes characteristics of the Mayan region.

It also specifies that codzobes can be prepared at any time, but chachacuaje is a traditional dish to say goodbye to people who have died, after November 8 but before the end of that month.

“The tradition is to do it after eight days, but many have already lost the tradition, many send it to cook, and very few of us learned about gastronomy and we know it; we are trying to rescue them, we organize ourselves to prepare and invite other younger people so that they know how to do it ”, he said.

Tequila Sales Are Expected to Nearly Double Over the Next Decade, WHY?