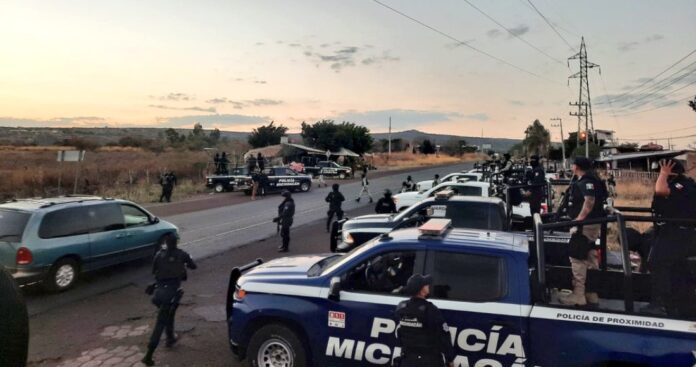 The authorities of the state of Michoacán, both the local Prosecutor’s Office and the Ministry of Public Security, have not yet released official figures.

February 27.– A wake in the state of Michoacán would have ended in one of the largest massacres at the beginning of 2022 since it was reported this Sunday that several people were killed, placed with hands behind the neck, and formed in front of a house as a wall.

The video, which circulates on social networks, shows several men with long weapons ready to shoot. On the facade of a house, people can be seen in the distance in line, ready to be “shot”. The recording is made from another house at the end of the street and you can hear how the shots begin.

The attack by the men, who were traveling in trucks, as can be seen in the images, occurred in the town of San José de Gracia, which is the head of the municipality of Marcos Castellanos, in Michoacán, bordering the state of Jalisco.

According to the testimonies in the publication of the video on social networks, a commando would have arrived at the place of the wake and its members would have taken the men out into the street to execute them.

The Secretary of Public Security (SSP) of Michoacán indicated that it received a report of “firearm detonations”, for which they deployed an operation with the Army to the National Guard. However, the authorities of the state of Michoacán, both the local Prosecutor’s Office and the SSP, have not yet released the official figures.

According to the SSP, the objective is to “locate the possible perpetrators and create the conditions for the staff of the Michoacán Prosecutor’s Office to carry out the procedures that allow the facts to be clarified.”

The blockades and armed confrontations between drug cartels, local criminal organizations, and self-defense groups have caused a wave of displacement in the Tierra Caliente region, in the state of Michoacán.

The federal government has deployed 6,508 members of the National Guard to help with security tasks in Michoacán, an entity with important agricultural production —first national place in the cultivation of avocado, blackberry and strawberry—, but which has once again remained under siege by irregular armed groups.

Since August 2021, the populations of the municipalities of Tierra Caliente have been under crossfire because members of the CJNG blocked some roads and communication routes.

Marco Antonio Tinoco Álvarez, head of the State Human Rights Commission (CEDH), warned that between 45,000 and 60,000 children and adolescents would be in conditions of vulnerability due to the violence in Tierra Caliente.

In 2021, Michoacán ranked third nationally in terms of the absolute number of intentional homicides, with 2,732 murders, according to official government figures.