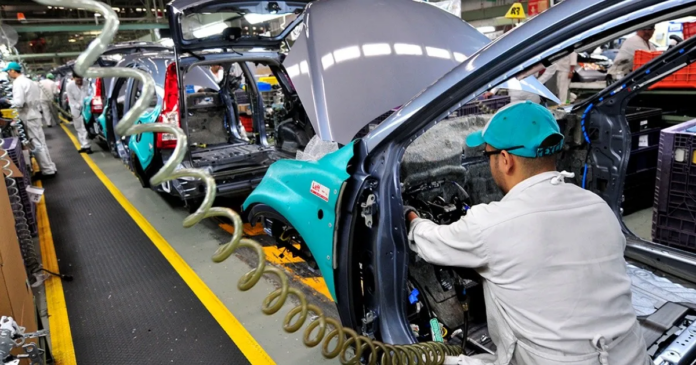 Cenagas has ordered dozens of companies to reduce their natural gas consumption by up to 99%, as part of the measures aimed at mitigating the risks due to the lack of imports from Texas.

The cut in the supply of natural gas has dealt a new blow to automotive production in Mexico. At least four vehicle manufacturers -Volkswagen, Nissan, General Motors, and Ford- have already confirmed stoppages at some of their plants due to shortages of this input

Expansión published on Wednesday that Cenagas has ordered dozens of companies – Volkswagen, Vitro, and Nemak, among them – to reduce natural gas consumption by up to 99%, as part of the measures aimed at mitigating risks due to the lack of imports from Texas, the main supplier of the input.

The measure will impact industrial users in the north of the country, but also others in Jalisco, Puebla, Guanajuato, Aguascalientes, the State of Mexico, and Veracruz.

The cut to industrial customers is given as a second measure to compensate for the lack of gas coming from the United States, after the National Center for Energy Control (Cenace), the operator of the electricity system, cut the electricity supply to the home users in much of the country.

Volkswagen announced on Wednesday that it will adjust its production for the rest of the week, in order to “meet the requirements for reducing natural gas consumption” requested by the National Center for Natural Gas Control (Cenagas).

Volkswagen said that personnel working in the segments affected by the natural gas cut will enter a technical strike scheme.

General Motors confirmed to Expansión that, due to the natural gas shortage affecting the Mexican territory, the Silao complex, Guanajuato, stopped its operations on the night of February 16.

This is one of the key plants of the American manufacturer in North America since it manufactures its Chevrolet Silverado, Chevrolet Cheyenne, and GMC Sierra pickups there.

“We will be adjusting the return to production, when the gas supply is restored to an optimal level,” General Motors said in an email.

Ford also announced Thursday that it will stop production at its plant in Hermosillo, Sonora, due to extreme weather conditions in the north of the country, a region that in recent days has suffered “mega blackouts” and cuts in gas supply.

“To make sure we minimize our use of natural gas that is essential for heating people’s homes, we decided to cancel operations for a week,” Ford confirmed in an email.

Nissan said they brought some shutdowns scheduled for March on line 2 of the Aguascalientes plant to February, while other plants were quickly switched to LP gas to maintain production levels.

“We will closely monitor the issue to make the appropriate adjustments if necessary,” said the Japanese manufacturer.

Toyota, in Guanajuato and Baja California

Due to this, there will be technical stoppages or reduction of shifts in both plants during the next days.

“At the moment and given the circumstances we will continue to assess and monitor conditions on a daily basis,” Toyota said in a statement.

The South Korean manufacturer said that on Thursday and Friday there will be a technical stoppage in the two shifts of the Pesquería plant.

Kia said that “production that does not run on those days will be rescheduled for the following week.” However, the availability of natural gas and the electricity supply will be evaluated before deciding when operations will restart.

The reduction in the availability of natural gas in the country also impacted the BMW plant in San Luis Potosí.

“Responding to the request of the authorities to optimize the consumption of natural gas, the plant has made a modification in its work plan to temporarily reschedule production in some of its processes,” said the German manufacturer.

BMW said it will continue to “closely monitor” the situation, hoping that the supply of natural gas will be regularized “and thus be able to resume full activities.”

Óscar Albín, president of the National Autoparts Industry, said Thursday in a virtual forum that the natural gas cuts are “a yellow light” that demonstrates the importance of the country seeking “its energy independence.”

“Overnight, we realized that our energy supply depends on Texas … We are going to get out of this as soon as the snow melts over there, but we are left with the tickle of seeking our energy independence”, Albín said.

The representative of auto parts manufacturers said that, more than fossil fuels, renewable energy is the way to go.

“It’s a matter of getting serious. Definitely, the answer lies in renewable energies. In Europe, the model already works. Well, we are going to copy it,” said Albín.