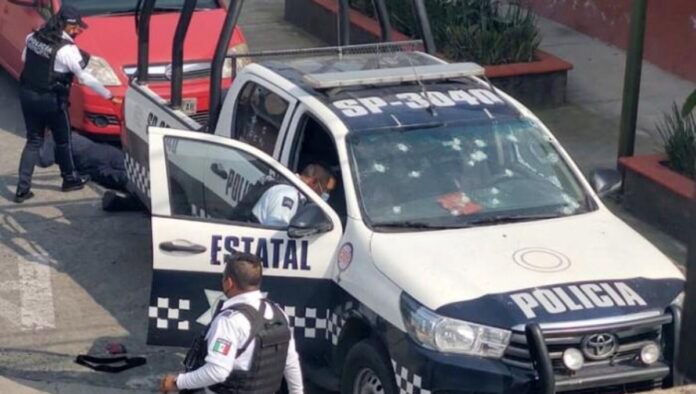 Two policemen from the Veracruz Public Security Secretariat were shot by armed men in the vicinity of the Orizaba Forensic Medical Service.

Two policemen from the Veracruz Public Security Secretariat were shot to death this Thursday afternoon in the vicinity of the Orizaba Forensic Medical Service, after being surprised by armed men who shot them without even letting them get off of the truck where they were.

The double execution occurred in the Magic Town of Orizaba, a region that for seven years has been the source of violence due to fights between Los Zetas, the Antrax group, the Jalisco Nueva Generación Cartel, and the “Sangre Nueva Zeta” criminal group, the latter with illicit operations in the mountainous area of ​​Veracruz and Puebla.

The Ministry of Public Security (SSP) reported that there are two other state police officers injured.

After the double execution, federal and state forces deployed a security operation in Orizaba.

Through its social networks, the press office of the Ministry of Public Security presumed that the search for the murderers is headed by the head, Hugo Gutiérrez Maldonado.

In Veracruz, official figures count 4,761 homicides (190 homicides per month), 203 femicides (almost ten per month), 463 kidnappings (18 kidnappings per month), and more than 56,000 robberies, of which more than 15,600 correspond to the theft of vehicles, taking as a parameter December 2018 to December 2020, according to figures from the Executive Secretariat of the Public Security System (SESNSP). The violence rates for January 2021 have not yet been counted

Officials of the National Guard, the Secretariat of National Defense (Sedena), the state police, and the Civil Force disarmed 389 Orizaba municipal police officers and transferred them to the El Lencero Police Academy, in Xalapa, where a confidence assessment will be performed.

Disarmament began at 11:15 am on Saturday, when federal and state forces arrived at the Inspection Office of the municipal police and surprised most of the members of the local corporation on duty, who had concentrated on the police station to carry out procedures.

Some 50 troops who were still patrolling the city when the search began, took shelter in the municipal palace and locked the doors with chains to avoid being disarmed.

Relatives of the police arrived at the site, requesting information on their whereabouts and legal situation.

The PRI mayor of Orizaba, Igor Rojí López, entered the Police Inspection to find out about the operation and find out the status of his policemen. Then he went to the town hall to meet with the policemen who barricaded themselves there, asked them to hand over their weapons, and to agree to travel to Xalapa to take the confidence control exams.

The policemen assured that they would not hand over their assigned weapons to the state police, but exclusively to Sedena officials, and they demanded security guarantees to move to Xalapa.

While the corporation was requisitioned at the Inspection facilities and another part remained in the mayor’s office, a helicopter from the Ministry of Public Security (SSP) flew over the city.

It was reported that when the inspection is complete and the others leave the municipal palace, they will be transferred in four state police buses to the state capital.

Through his social media accounts, the secretary of the SSP, Hugo Gutiérrez Maldonado, said that the operation is to verify that the uniformed men fully comply with the collective license to carry firearms.

He reported that while the situation of the police is accredited, temporarily, the State Police will assume security in the district.

“This type of controls has the objective of supervising and verifying that the official weapons have not been used in the commission of crimes.” On recent Wednesday, three state troopers were killed in an ambush.